In case you haven’t seen it yet, the December/January 2001 issue of Barista Magazine is full of interesting articles that highlight a great year in the specialty coffee industry. Featured among these highlights is Sandy Bledsoe’s in depth report on his experience at the first ever Barista Guild Camp Pull-A-Shot. 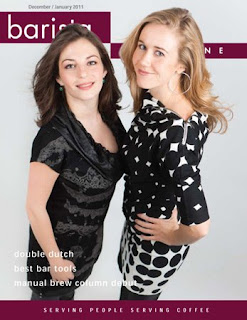 Sandy talks about winning his all-expense-paid Barista Magazine scholarship to Camp Pull-A-Shot and the whirlwind of excitement, nerves, and sheer awe that overtook him when he arrived in beautiful Santa Barbara, CA. There he was, a new face to the BGA community, suddenly working side by side with the people he’d only heard about until then. He quickly discovered that the BGA is a welcoming community and bonded with his fellow camp-goers over their shared passion for making excellent coffee. He went on to discuss the certifications and professional development opportunities that were offered at Camp PAS. As he says, “the classes, group sessions, and certifications were the real meat of [the camp].” It was clear that the experience enriched his life as a barista both personally and professionally, and the connections he made and the lessons he learned traveled with him far beyond his time in Santa Barbara. 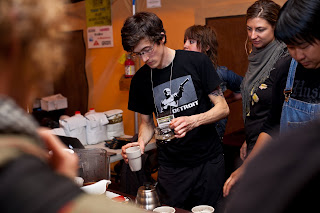 Take a look at Sandy in action.

When reading Sandy’s article, it is clear to see that for those in attendance Camp Pull-A-Shot represented more than just an excuse to roast s’mores over a campfire with like-minded coffee enthusiasts. Rather, the BGA camp represented true growth and development in a group that SCAA president Peter Giuliano called “the future of the entire specialty coffee industry.” The hard work of the SCAA’s Marcus Boni and the BGA Executive Council and Chapter Representatives really paid off and made Camp Pull-A-Shot one of the clear highlights of 2010. 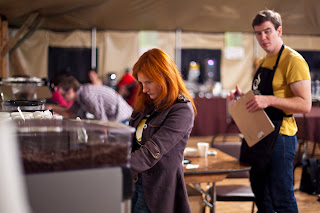 Camp Pull-A-Shot 2011 is less than a year away-and we can promise that next year will build on the foundations made in 2010 and grow the event even further. Be sure to pick up your own copy of Barista magazine to read the full article and follow the BGA on Facebook to get all the CPAS updates as they happen.