In case you missed the explosion of tweets, Facebook statuses, and blog posts, the 19th annual Seattle Coffee Fest (59th Coffee Fest overall) was held from October 29th to the 31st in the beautiful Emerald City. The SCAA’s own dynamic membership duo, Maria and Mansi, spent six days soaking up all the fantastic coffee culture at the show and popping in to visit our amazingly hospitable members. 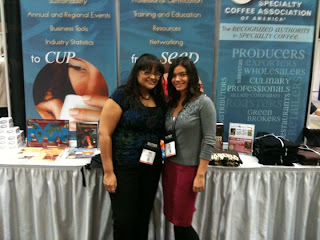 M&M strike a pose in front of the SCAA booth

The adventure all started Thursday night at the Washington State Convention and Trade Center at a welcome reception sponsored by SCAA member companies Espresso Supply, Batdorf and Bronson, iSi, Roast Magazine, Theta Ridge Coffee, Caffe D’Amore, and Monin. What a great way to kick off a weekend of coffee! 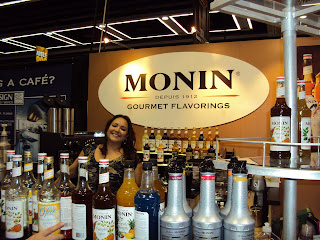 Friday, the real fun began. There was no shortage of passion, camaraderie, and skill during the three days of Coffee Fest and M&M have only great things to say about all the people they met and everything they experienced. Stationed at SCAA booths #907 & 1006, Mansi and Maria spent the weekend seeing familiar faces and meeting new ones. This year the SCAA hosted a larger booth and was able to provide more to the guests that happened to venture our way. Representatives from shipping company YRC were on-hand to explain some of our numerous member benefits. We also had the pleasure of welcoming Roasters Guild Executive Council members Wendy Dejong and Phil Beattie to educate attendees about all the work Roasters Guild is doing in the industry. Finally, we’re proud to say that for the first time we were able to bring attendees a smaller version of our SCAA resource center stocked with highly popular SCAA, BGA and RG merchandise. We want to thank everyone who came out to our booth and said hi to our staff and guests. 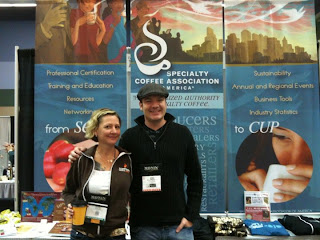 Phil & Wendy of the Roasters Guild at the SCAA booth

But it didn’t stop there. What would a three day coffee festival be without a little after-hours fun? We followed M&M via twitter and facebook as they attended all the great events that were held over the weekend. Friday night started with an opening reception at Von’s Roasthouse. The festivities hopped over to Caffé D’arte who graciously opened up their entire cafe and provided delicious cupcakes and wine for guests. Last but not least, they made their way over to a barista gathering at Trabant that featured latte art throwdowns, a costume competition, and a taco bar! 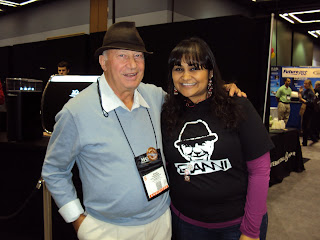 Mansi with Gianni of Nuova Simonelli. We’re digging the shirt!

Saturday night was all about costumes and fun coffee times starting with Atlas Importer’s Day of the Dead party where they enjoyed some delicious tres leches cake. Next, the duo made their way over to SCAA member Victrola Coffee’s Brew HAHA where there was a costume contest, live music, BGA membership raffle, and of course lots of beautiful latte art. The last stop on the whirlwind tour took them to the Sprudge after party at Six Arms pub, conveniently located half a block from Victrola, where fans could meet the Sprudge crew and pick up the official “Frothy Gossip” T shirt. Don’t you just wish you could have been there with them?! 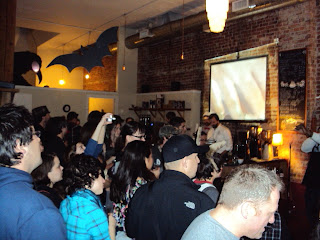 Victrola latte art throwdown
Whew, it’s a good thing they had all that great coffee to get them through the weekend!! Be on the look out for see the rest of Mansi and Maria’s exciting escapades through the streets of Seattle.

Did all of that coffee geekery and fun leave you jonesing for more? Well, we’ve got the cure-the SCAA Event is just around the corner (April 2011!) and registration opens up NEXT MONTH! Don’t forget to take advantage of early bird pricing by registering early. Be on the lookout for more details soon, right here on the blog.