Over the days of October 12th to the 14th in Dubai, UAE, the SCAA partnered with International Conferences and Exhibitions to host the annual Middle East Coffee and Tea Convention. The event is the only dedicated coffee and tea trade show in the Middle East and offers attendees a plethora of events, information sessions, and networking opportunities focused on nurturing the expansion of the Middle Eastern coffee and tea market.

We’re proud to say that this year’s Convention was a big success. SCAA Executive Director, Ric Rhinehart said that “this year the SCAA classes were the highlight of the show, with fully subscribed classes in Latte Art, Cupping, Roasting, Customer Service and more.” A recent post on the Five Senses Coffee Blog describes the “great sense of camaraderie and urge to learn and develop further.” It’s clear that the developing coffee industry in the Middle East is making great strides and encouraging the growth and training of its baristas and other professionals. 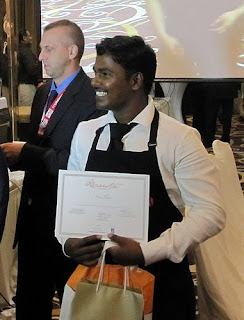 2010 National UAE Barista Champion, Raja Muthusamy
With that said, we’d like to congratulate the winner of the 2010 National UAE Barista Championship, Raja Muthusamy. Raja impressed the judges with a single origin Mexican coffee which he had roasted himself and a signature drink combined which combined the Mexican coffee with a Colombian single origin syphon, almond milk, jaggery (palm sugar) and cocoa. If Raja’s success is any indication, we see great things on the horizon for other Middle Eastern baristas.

Raja showing off the skills that won him the competition.
We’d also like to congratulate the rest of the participants and those who placed:
1st – Raja Muthusamy
2nd – Dada Kalander Noor
3rd – Romeo Perello
4th – Kushal Balami
5th – Almas Ahmad
6th – Elavarasan Pandiyan
You’re all assets to the coffee industry and the barista community.
To read more about the UAE Barista Championship you can read the Five Senses Coffee Blog article at: http://blog.fivesensescoffee.com.au/2010/10/18/uae-barista-champion-announced/
Related Posts