The coffee community proves once again that it can work together to make the world a better place. A group of baristas in Austin, TX, recently held an event that showed off their impressive talent and raised money for a worthy coffee cause. 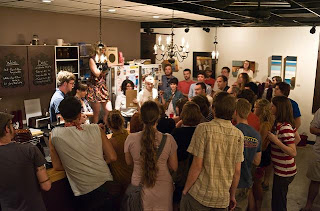 A crowd gathers in Once Over Coffee Bar to watch the barista throw down. Photos by Katie Spence.
On Sunday, September 26th, members of the coffee community gathered at SCAA member, Once Over Coffee Bar in Austin, TX for the first ever “Give-It-Away” Latte Art Throw Down. The goal of the competition was to raise money for the organization Coffee Kids, a charity working to better the lives and livelihoods of coffee-farming families. The event, planned and hosted by Once Over Coffee Bar, was also sponsored by Visions Espresso Service, Cuvee Coffee, Waterfalls Gourmet Beverages, Wailua Soda, Schlotzsky’s, Slow Food Austin, and the Barista Guild of America. 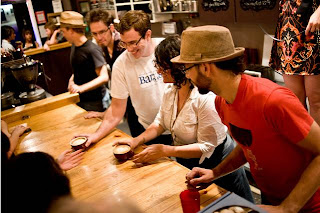 Both professional and home-baristas from all over the Austin area were invited to take part in the throw down. In addition to the barista competition, there was also a raffle which included prizes such as a BGA membership and an iPod shuffle. The competition drew in 24 competitors with the top spots being swept by Caffe Medici baristas Lorenzo Perkins (the BGA South Central Representative) in 1st, Jon Aldrich in 2nd, and Patrick Halett in 3rd. Also competing was Dan Streetman, a BGA Executive Council Member. 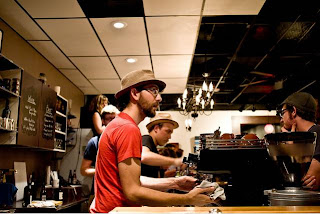 BGA South Central Representative, Lorenzo Perkins, walks away as the Throw Down Champ.

The throw down made over $800 and all proceeds went directly to Coffee Kids. Following the success of the event, Once Over has decided to continue these throw downs as semi-annual events to raise money for both Coffee Kids and a local charity that donates bicycles to children during the Christmas season. If this inaugural throw down is any indication, we would say that Once Over is certainly on to something. They’ve discovered a way to both show off the skills of some fine baristas and bring the coffee community together in the spirit of helping those less fortunate. Bravo! 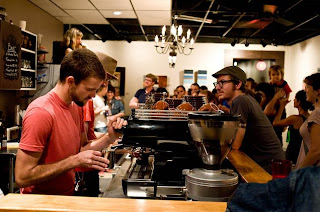 Coffee and charity. Is there any better combination?
If you’re interested in attending or competing the next throw down, you can visit the Once Over Coffee Bar website at: http://www.onceovercoffeebar.com/.

Were you there on Sunday? Tell us about it in the comments below!