Jana Bain and Heather Perry of Klatch Coffee are the 2010 UBC USA winners!

The LA Convention Center was the stage for a truly impressive showing of barista expertise by Klatch Coffee baristas, Heather Perry and Jana Bain. Over the course of the three day Western Foodservice and Hospitality Expo many baristas stepped up to compete in the annual Ultimate Barista Challenge, but after competing in three intense events only the two Klatch baristas walked away with victorious smiles on their faces.

Heather Perry, who walked away with wins in “Best of Brew” and “Latte Art Challenge,” is a familiar face around both the SCAA and the Barista Guild of America. Truly a trailblazer, she is the only woman to win the title of United States Barista Champion twice. She also served as the former chair of the BGA Executive Council, and continues to support BGA and SCAA events and initiatives throughout the year. At Klatch Coffee she is the Director of Training and Consulting. Many a barista have learned the tips and tricks of the trade from Heather, and it is clear that the skills she passes on are invaluable.

Jana Bain, another barista for Klatch Coffee and one of Heather Perry’s former trainees, truly proved that she can hold her own against the competition when she took the title in the “Espresso Frappe Challenge.” She wowed the judges and gained praise from her mentor/competitor with the blackberry cheese cake frappe she named “Blackberry Bliss.” With her good training and obvious natural talent, it’s clear that Jana is going places in this industry and we wish her all the best. 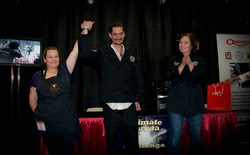 Jana celebrates her victory as her competitor and mentor, Heather, cheers her on.

Interested in competing in a SCAA Regional Barista Competition or the USBC / WBC ? Visit their websites for information or attend the 2011 RBC events which will begin in January.