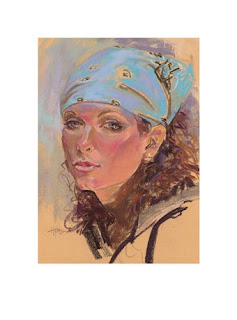 Alisha from the Café Society collection by William Hosner
(as it appears on the Interlockhen Public Radio site – link below)
After moving to Petoskey, Michigan, artist Bill Hosner discovered the amount of dedication and skill required to create a quality cup of coffee. After building relationships with his local baristas and seeing their hard work first hand, Hosner decided to recognize these dedicated professionals. He has created a series of portraits that depict the baristas in the midst of what they do best, making quality coffee. His exhibit, “Café Society,” at the Little Traverse History Museum of Petoskey not only pays tribute to 30 dedicated baristas, but also funds a scholarship for the benefit of future baristas who wish to continue their educations.
The Little Traverse History Museum in Petoskey, Michigan is currently displaying an exhibit called “Café Society,” a special set of thirty portraits created by nationally acclaimed artist, William Hosner. Described as having “coffee in his veins,” Hosner was inspired by the dedication of the baristas at Petoskey coffee shop and SCAA member, Roast and Toast. In her article for Interlochen Public Radio, Linda Stephan quotes Hosner saying, “you know, as I would sit and talk to them, I just became inspired by these fine young Americans, working hard. And I was able to look beyond tattoos and piercings and sometimes hair color not found in nature, and saw that they had visions and dreams and a lot of it revolved around education.”

It seems Hosner has hit one of the central ideas behind the specialty coffee industry and what it means to be a working barista. Simply put, they are people doing what they love and working toward their ultimate goals. As Kendall P. Stanley puts it in an article for Petoskeynews.com, “a barista is not only a barista, but a fellow traveler.” Over several years and through many portrait sittings with the baristas in their own coffee shops, Hosner set out to show just that. His portraits capture the baristas looking unguarded and focused; in the throes of their craft.

In addition to being a touching tribute to baristas who can often go unrecognized in the day-to-day scheme of things, the “Café Society” portraits are also Hosner’s way of giving back to those deserving baristas. Hosner has used the money raised by selling the portraits to private buyers to start a scholarship fund of $10,000 through the Petoskey-Harbor Spring Area Community Foundation. The money will be used to give local baristas a chance to continue their educations and achieve their goals.
This is certainly an exhibit worth visiting if you’re a coffee enthusiast in the Petoskey area. The “Café Society: Coffee House Portraits” exhibit is currently on display at the Little Traverse History Museum in Petoskey, Michigan and will run until September 10, 2010. The portraits are available for purchase and proceeds go toward the scholarship fund set up by Hosner. For more information, visit: http://www.petoskeymuseum.org/.
To read Linda Stephan’s article, visit: http://ipr.interlochen.org/arts-and-culture/episode/9505
To read Kendall P. Stanley’s article, visit: http://www.petoskeynews.com/columns/article_d97b9e9c-a94e-11df-87ce-001cc4c002e0.html
Related Posts